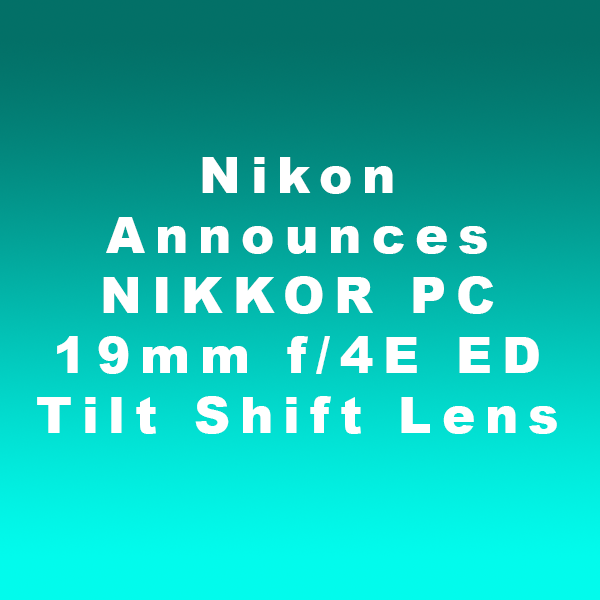 The highly anticipated NIKKOR PC 19mm f/4E ED tilt shift lens is the widest perspective control (PC) lens on the market. It is also easier to use then its predecessors because the tilt and shift mechanisms can be adjusted independently from each other, eliminating the need for lock operation.

For photographers who aren’t familiar with PC lenses, they feature a shift function that allows photographers to move the lens parallel to the image plane. A complimentary tilt function facilitates optical axis tilt in relation to the image plane. As described by Nikon, the shift and tilt features work together to allow photographers to “control perspective, correcting the distortion of subjects dependent upon camera angle, and bringing entire scenes and subjects with depth into focus (foreground to background).”

The NIKKOR PC 19mm f/4E ED Tilt Shift Lens is largely intended for professional architecture and interior photographers. Although landscape and fine photographers will also appreciate its superior optical performance and the widest angle of view.

Below are several of the key features:

• Adoption of a new “PC Rotation” mechanism that allows users to freely set the direction of shift and tilt operation from parallel to perpendicular to each other
• Superior optical performance that begins with excellent resolution all the way to the edges of the frame, making the most of high-pixel-count digital SLR camera capabilities
• Adoption of Nano Crystal Coat, that enables sharp and clear images in which ghost and flare is effectively reduced with superior antireflection characteristics
• Highly durable fluorine coat that effectively repels dust, water, grease, and dirt applied to the outer surface of the lens element at the extreme front of the lens

It is important to highlight that the new lens will not work with all Nikon bodies. Specifically, when used with cameras other than the D5, D4 series, D3 series, D810 series, D500, or Df, photographers won’t be able to use some combinations of shift and rotation because the lens comes into contact with the camera body.