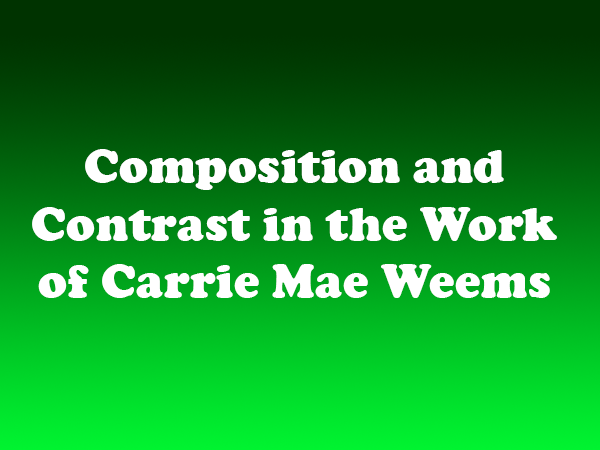 Composition and Contrast in the Work of Carrie Mae Weems

Winding your way through the corridors featuring Italian Futurism to the second floor at the Guggenheim, a treasure of Carrie Mae Weems photographs is exhibited in a thought provoking and moving arrangement.

Photographers seeking inspiration for their own work and an illustration of how composition and contrast make images with power and punch should visit the Guggenheim to see this.   So too should those seeking insight about how to display their work or their collections.

The individual photographs are masterpieces of composition, staging and technique.  Even Weems photojournalism and her documentary photographs demonstrate her mastery of composition and the use of line, form and light to create an emotional affect.

The role of the curator as artist is the theme of the Whitney Biennial this year.  Ten blocks from the Whitney, the Guggenheim’s exhibit, Carrie Mae Weems: Three Decades of Photography and Video, illustrates the concept of “curator as artist” with Kathryn Delmez arrangement of Weems’ work.

As presented by the Guggenheim, “the exhibition traces the evolution of Weems’s career over the last 30 years, from her early documentary and autobiographical photographic series to the more conceptual and philosophically complex works that have placed her at the forefront of contemporary art.”

The curator, Kathryn Delmez, selected photographs from Roaming (2006), The Louisiana Project (2003) Slave Coast 1993 and Sea Islands series (1991-1992) and mixed them with excerpts of texts and some of Weems video.  This not only affords viewers an opportunity to see a wide range of Weems’ work and her development as an artist, but the arrangement is a tour of Weems mind, muse and soul.

From Here I Saw What Happened and I Cried (1995-1996), “layers new text over found historical imagery to critique and lament prejudiced attitudes toward African Americans throughout the 19th and 20th centuries.”

Weems’ Kitchen Table Series (1990) explores the role of women by mixing text with well composed images of women in a domestic setting to create contrast.  She succeeds at creating images that are both visually beautiful and socially provocative.

Weems’ earlier work from her series, Pictures and Stories (1978-1984) is displayed in an adjoining room.  This series explores black identity with pictures of people doing ordinary things.  Each of these pictures is a masterpiece of composition.  They use light, circles and lines to direct the eye to darkened faces or to highlight an object.

Kathryn Delmez, arranges Weems’ photographs and videos in juxtaposition with one another to create a viewer experience that penetrates the mind and meaning of Carrie Mae Weems.  Some photographs use simple settings to address race, gender, and class. Others depict a number of scenes, ranging from a mother and daughter putting on lipstick to a husband and wife embracing.  The selection of work itself creates contrast, which is a technique Weems employs in each of her images.

Speaking about her work, Weems says, “I use my own constructed image as a vehicle for questioning ideas about the role of tradition, the nature of family, monogamy, polygamy, relationships between men and women, between women and their children, and between women and other women—underscoring the critical problems and the possible resolves.”

Weems credits The Black Photography Annual, a photography book featuring the work of African-American artists, among her early inspirations. While her subjects are also largely African American, Weems has said that she wants “people of color to stand for the human multitudes” and for her work to resonate with all walks of life.

The exhibit runs until May 14, 2014. In April, the museum will also present several public programs in conjunction with the exhibition. Additional information can be found on the Guggenheim’s calendar.