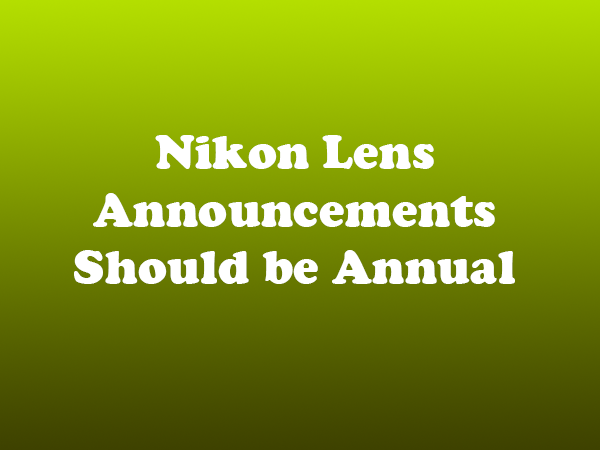 Nikon Lens Announcements Should be Annual

Wouldn’t it be wonderful if Nikon would announce the lenses they plan to make for the year at one time?  That would certainly remove the anxiety from some purchase decisions and allow photographers to budget and plan their expenses for the year.

Now that Sigma and Tamron are making lenses competitive to Nikon in quality, perhaps Nikon should revisit its marketing strategy.  An annual announcement of all new lenses for the year might cause sales of older model lenses to decline, but it would certainly help keep Nikon lenses with Nikon cameras and help prevent Nikon owners from straying.

SLRGearReview said the following, “Despite being twice as expensive, we found the Sigma to be on an aperture-to-aperture basis a slightly sharper lens, with the Sigma 35mm producing tack-sharp results the Nikon 35mm could not. Chromatic aberration is also a bit lower: vignetting and distortion results are about the same. The Nikon is weather-sealed, where the Sigma is not.”

For those Nikon snobs who didn’t already buy the Sigma 35mm f./1.4, Nikon’s new 35mm f./1.8G offers a Nikon alternative that is slower for slightly less money—about $500.  This new Nikon lens announced in January, 2014 will likely delay people from buying the Sigma f./1.4 until the two lenses could be compared.  Had Nikon announced this lens last year, it might have caused potential buyers to delay their Sigma purchase for an even longer time.

Nikon owners may still choose the Sigma f./1.4 over the Nikkor f./1.8 after the two lenses are compared.  For Nikon owners to overcome the “Sigma stigma” the Nikon 35mm f./1.8 needs to get rave reviews.  Unfortunately, not all of the prime f./1.8 Nikon lenses have been as well received as the Nikon 85mm f./1.8.  Mostly, the lenses in this series of Primes are just considered “good value.”  To buy a faster Sigma lens that is so well reviewed for under $200 more makes this a difficult choice for all but the most dogmatic Nikonians.